A brief history of Christmas sweets

The tradition of preparing sweet Christmas pastries in Central Europe (and Czech Republic) dates probably back to the pre-Christian times. At the winter solstice the Celts celebrated the rebirth of the sun god Belen and on that occasion they baked festive honey cakes. vegan christmas sweets

The Slavs, who mixed with the Celts, who stayed, celebrated the death and rebirth of the sun god Dazbog on Christmas Eve. They believed when Dazbog dies, the time of fury comes, for the world is without its solar rule and various mythical creatures such as werewolves, witches and vampires emerge from the darkness. People were dressing up for the beasts, trying to drive away the real ones and walking around the village in groups, singing, playing various scenes and wishing people happiness and health, for which they received gifts as food, drinks, money and also sweet ceremonial pastries.

According to the chronicle from the end of the Middle Ages, people hung sweet pastries on orchard trees, in the rooms and in the stables at Christmas, so that everything would prosper and the family would be happy in the following year. The sweets were sweetened with honey and dried fruit. People were also forming figurines directly from dried fruit with which the children played and then ate them. Recipe for vegan Linzer eyes (or other shapes): 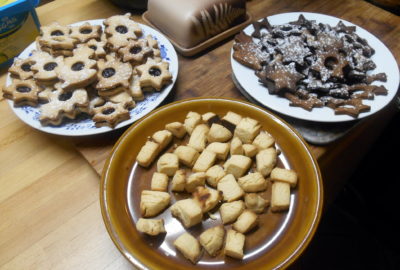 And in conclusion there is a compilation of Czech Christmas sweets made by various families: vegan christmas cookies

Testosterone and women’s behavior – highlights of my bachelor thesis     Testosteron in women      These are...
Homemade wheat-rye bread from the oven While baking homemade bread we know what...
Easy buckwheat flatbreads as made by poor peasant      These flatbreads are ready in a min...
Barley ragout with tandoori masala spice (vegan)        The effects of barley ...